Thank you for your patience while we retrieve your images.

Home»Photos»Tall Ships 'El Galeon' and 'The Lynx' in Newburyport

Created 12-Jul-16
47 photos
In May and June, not one - but two - tall ships graced the shores of our Merrimac River.

The 'El Galeon' is a 170 foot, 495 ton, authentic wooden replica of a galleon that was part of Spain’s West Indies fleet in the 16th century. These ships were the type of vessel used by the Spanish Crown for maritime expeditions during the 16th through the 18th centuries.

Galleons were intended to discover and then establish trade routes between Spain, America and the Philippines islands and formed what was then called the “Fleet of the Indies”. For three centuries, these Spanish galleons crossed the Atlantic Ocean back and forth, sailed around the Caribbean Sea and the American coasts and covered the Pacific route as well. They carried plenty of seamen, merchant traders and settlers, while their holds bore the fabulous loads resulting from American and Asian trade.

The tall ship 'The Lynx' is a bit smaller (78 feet) than the 'El Galeon', but just as historic. It is a replica of a Baltimore clipper schooner that actually existed during the War of 1812. The original Lynx was captured by the British, and a near duplicate was built later in the war and served for several years.

During the American Revolutionary War, the Continental Congress and some state governments issued privateering licenses, authorizing “legal piracy” certificates, to merchant captains in an effort to take prizes (ships) from the British Navy and Tory (Loyalist) privateers. This was done because the nascent American government did not have a significant navy. Also, American leaders wanted to take prisoners to stimulate prisoner exchanges of its own captains who were captured by the British.

The Constitution authorized the U.S. Congress to grant letters of marque and reprisal — in part because its ocean-going force was being plundered. Between the end of the Revolutionary War and 1812, Britain, France, Naples, the Barbary States, Spain, and the Netherlands seized approximately 2,500 American ships, historians say.

Both the 'El Galeon' and the 'Lynx' were magnificent and I'm thrilled I was able to see them, explore them and capture their beauty! Thank you to the Custom House Maritime Museum and Lowell's Boat Shop for sponsoring these amazing vessels! 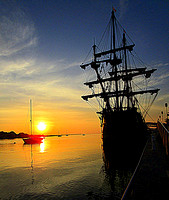 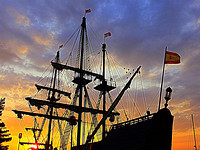 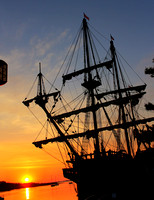